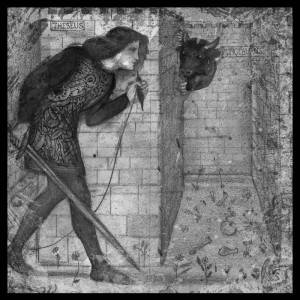 Dolven are from the US and this is their début album.

Dolven are an unusual proposition. They play acoustic Neo-Folk Doom. That’s right; unusual and unexpected, but it works. Electric guitars are used, but only for solos, and only very sparingly.

With only three songs having vocals, this is a largely instrumental release. It’s designed to be expansive and atmospheric, juxtaposing the beautiful with the terrible darkness of existence. Grand claims I know, but once again, it works.

This is not the kind of music you idly throw on when you’re getting ready to go out, (unless you’re of a particular mindset, of course), rather it’s the kind of release that demands more attention from you. This is not hastily-consumed, throwaway music; this is music that has depth and soul, insofar as anything can be said to.

These tracks have both a lightness and heaviness to them, a sideline of the eternal war between light and dark, pointlessness and meaningfulness. It’s a surprisingly emotive journey through 42 minutes, one that reminds just how expressive acoustic guitars can actually be in the right hands. The thing which springs to mind as I listen to this is Scream of the Butterfly by Acid Bath, which is one Hell of a compliment as that’s one Hell of a song.

When they do appear, the vocals are deep and mournful, emphasizing the Doom aspect of the slow, thoughtful music.

This is an album that’s unexpectedly enticing, drawing you in with its veiled charms into a world of almost-medieval Neo-Folk, all translated through the lens of Doom Metal and re-transcribed into acoustic interpretations that carry the weight of influence from its former incarnations into what is ultimately its final form – Navigating the Labyrinth.

Fed up of the same old thing and looking for something a bit different? If so, in many ways this is as impressive and essential as it gets.