Earlier in the year Boddicker released their False Flag EP. It was like a kick to the face and really caught the attention of the authorities. I wanted to find out more so I contacted them via the underground and I’ve shared this communication below.

Since this EP they’ve released their début album Crime Upheaval, which is another short, sharp bout of violence that will surely raise their wanted status. Let’s find out what it’s all about…

Tell us a bit about the Boddicker concept – can you fly Bobby?

Clarence Boddicker is an uncompromising cold-blooded killer driven by profit and sadism. So are we.

Nothing really new except for Water Torture, Teitanblood, and Vallenfyre. Right now the OCP office has been spinning 70’s Aerosmith, early At the Gates, Dark Angel, D-Clone, Machetazo, and God Macabre.

How do you feel the current Grind scene is holding up – healthy or not?

Hit or miss. There are a lot of great grind bands currently hustlin’ like Nak’ay, Archagathus, Water Torture, but at the end of the day we’d rather rob a liquor store while Repulsion’s ‘Horrified’ plays in my camaro.

You have an unusual Grind sound in that you also have a large Sludge influence. Is this something that’s intentional or did it just happen?

A little bit of both. Everyone has their own eclectic tastes, but one of the few bands we can all agree on is Eyehategod and Buzzov*en. It’s only natural that their influence made their way into our sound. 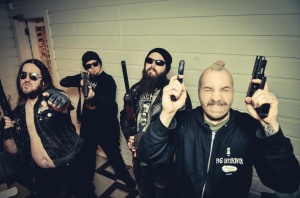 What did you want to achieve with False Flag?

We wanted to curate an intense, distinctive, aggressive and memorable release. Whether or not we did that is in the eye (or ear) of the beholder.

Overall, yes. However, we’ll be a little generic and self-serving and say that we’re overall more satisfied with ‘Crime Upheaval’. Saying that, we all firmly believe that ‘False Flag’ is a ripper.

What are the lyrics all about then?

Crime, anarchy, and spitting in the face of all authority.

What’s the meaning of the EP title?

A false flag is a covert military operation designed to deceive in such a way that the operations appear as though they are being carried out by entities, groups or nations other than those who actually planned and executed them. Collectively, we’re all interested in operations perpetuated in this manner, and felt it was a fitting EP title.

How are your songs written?

Usually after a crack binge and getting down with our favourite Napalm Death, Celtic Frost, Carnivore, Cro-Mags and Black Flag records.

How do you see your sound/direction developing in the future?

What can we expect from a future album?

Well, it’s technically already out since we took a ridiculously long time to answer these questions. Pretty much more of the same, but with more succinct sounds, and more comfortable and confident songwriting. You won’t get too many surprises from Boddicker. We’re very much one-track minded individuals.

What’s next for Boddicker?

Listen to their album below…