Having recently released their début album Imago, Mordbrand are like a fiery beacon of hope and devastation in the overcrowded Death Metal arena. Time to find out more – Björn Larsson gets a grilling below…

Give us a bit of history to Mordbrand

Me and Johan started out doing death metal again after a hiatus of a couple of years (we used to do the same in a band called Horned that we split up in 2002). I was very inspired by older filthier death metal bands – which sounds like a cliché today in this over flooded OSDM “scene”. Well, that’s the way it played out and we recorded some songs in our rehearsal place (that then was inhabited by THE LAW, the thrash metal band that we were very active with then). After releasing a split with EVOKE (eng) we decided to bring things up a notch. We contacted Per, he liked what he heard and we started writing and recorded what came to be “Necropsychotic”.

Where did the name come from?

I thought of the name “Arson” but I didn’t like it too much. Then my fiancee came up with the idea to use the swedish translation – “Mordbrand” – in a very non-Yoko kind of way. We, the band, thought it sounded good and didn’t care too much about the actual meaning of it. This was still in the early phase of the band but the moniker just stuck with us.

Lyrically: Total death. Musically: Old death metal, newer esoteric death & black metal and crusty punk.
What are you listening to at the moment that you would like to recommend?

How did you decide on the style of Death Metal that you wanted to play – what appeals about the Swedish Death Metal sound?

We started out playing Autopsy-esque death metal and never really thought we’d make “swedeath”, and I’m not sure we do. I think it’s the d-beat stuff that make people draw that conclusion. We don’t care, people can label us in any way they want. I use a Boss HM2 pedal which is quite important for the swedish sound, and maybe people can’t get passed that. I don’t know.

I’m pleased that you’re not just regurgitating past glories with your music. You seem to be one of the few bands who are trying to move the style forward and develop it. What are your thoughts on this?

Yes and no. I think we’re moving forward as a band but I don’t feel we have a responsibility against the genre. We do music the way we like it and we happen to digest a lot of melodic and dark music upon the strong death metal foundation. So we don’t have a deliberate task or anything. But it’s obvious that you get that we’re not a tribute band and that’s something more and more people are discovering.

What were your goals with Imago?

To make a record you haven’t heard until you’ve heard the whole thing. A lot of records do ‘sounds’ pretty well. Bands are good at nailing a mood or a sound of some genre or scene that they dig – which is cool. Our focus is to make _songs_ and try not to repeat ourselves. You’re gonna hear a lot of different things going on on “Imago”, but I think and hope that it all stays in the framework that is Mordbrand. Per’s unique vocals bind it all together in my opinion.

Often it’s me making the riffs and putting together demos that I send to the other guys. Then they bring me feedback and Johan starts rehearsing the songs. When the demo’s sound solid we start recording and produce it together. Since we record everything ourselves we’re not reliant on someone’s payroll and we get to throw away stuff if we’re not pleased with it, which is great ’cause we don’t have to gamble with quality. 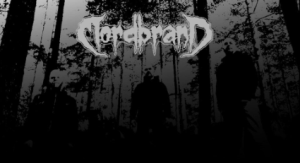 Would you change anything if you had to do the album again?

Of course. Since we do everything ourselves we’re constantly learning. It’s a process in itself to not think about all the flaws in the end result. But everything is flawed, so it’s about ‘letting go’ and realizing when you’re done. Luckily we don’t have to do the album again.
How do you see your songs/direction developing in the future?

Well, the way we develop as artists and songwriters. Mordbrand will always be dark and brutal and that’s the only guarantee we can give.

A split 7″ with RITE is on the way and should be out during the summer on Chaos Records. We also have a 7″ of our own with two new songs on it. Two other splits are planned too, but we can’t reveal any info on that just yet. All of our releases are gonna contain original unique material, at least that’s the plan, so we won’t regurgitate old stuff and release separately just because it’s convenient. We did that with two songs on “Necropsycotic” ’cause Per’s ideas changed the songs into new entities (and he didn’t sing on the original versions), but that was an exception to the rule.