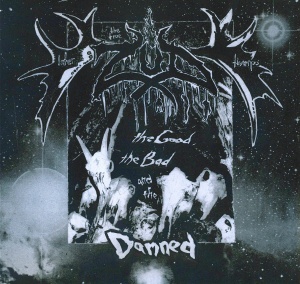 Zud come from the US and this is their début album full of Black Metal played purely on the band’s own terms.

After a perfunctory intro the first thing that strikes me is their use of a long, winding guitar solo. Now I like a good guitar solo anyway, but Black Metal and guitar solos are not things that are normally associated with each other, so straight away we have a pleasant surprise.

After this promising start the band continue to deliver with Old-School Black Metal mixed with Southern Rock and even a dash of 70’s Prog. The songs are played at length and with belligerence, bluster and melody.

The riffs have character and swagger, seemingly jumping out of the speakers to kick you in the shins. There is a definite Blues-y, Rock-y air to the riffs; almost feel-good Stoner Rock combined with the nihilistic core of Black Metal. The melding of the two genres comes across differently in Zud’s work to how it does in, say, Glorior Belli; while the latter have a more overt approach to mixing the styles, Zud somehow manage to make it seem a more natural choice and the combination is seamless.

The singer spits his lyrics with character and personality. His voice is a non-standard Black Metal rasp; in fitting with the out-of-the-ordinary music Zud have a vocalist that embodies the unconventional approach that they take and is the perfect mouthpiece for the band.

They’re even on to a winner with the production; it’s dirty enough to be authentic but clear enough to allow the songs to do their thing. Top marks.

Favourite Track: Skull Shaped Bell. A microcosm for the album as a whole; it combines rawkus riffing, laid-back noodling and attitude to spare.

Like the aforementioned Glorior Belli this is a band who are daring to do something different; daring to go their own way. In a cesspool of mediocrity and Darkthrone-clones they embody the unfettered spirit of Black Metal far better than many of their so-called peers. An exceptional release.