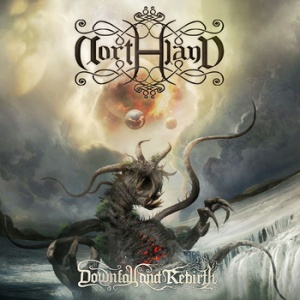 There are a whole load of different instruments used on this album in addition to the usual ones that form the Metal core. Keyboards, piano, flute and bodhran are all present, as well as guest musicians and singers.

Northland take all of these and wrap them up in a Melodic Death Metal delivery that successfully knits the Folk influences into a cohesive Metal whole so that the album flows nicely across its 11 tracks.

Downfall and Rebirth has a good sound that brings the Folk and the Metal components together so that you don’t feel like you’re listening to a band of two halves.

Harsh and clean vocals are both used, with the harsh vocals having quite a bite and the cleans being of the epic, stirring variety.

Epic and stirring are good words to describe the music as well, but not in the way that, say, Power Metal or certain strains of Black Metal can be. This is more of a journey to old lands that have been forgotten, and a reliving of the tales and deeds of heroes long past.

The songs are well-written slabs of Folk-enhanced Melodic Metal and whilst the clean vocals provide an extra layer of accessibility the band never stray too far into commercial territory; this is real Metal through and through.

I’ve really enjoyed this. It gets the balance between its jaunty, upbeat nature and its darker Metal soul just right.

Check out Northland and get ready for an epic adventure.