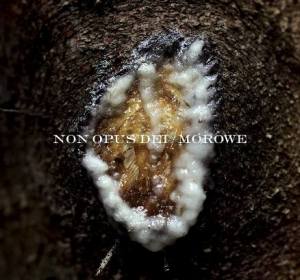 Non Opus Dei are up first, with three tracks of unconventional Black Metal. First track Dziwki Dei almost comes across as a Black Metal Meshuggah, if you can imagine such a thing. Think less Djent though, and more just…unusual. It works. The next track continues its off-kilter approach to Black Metal, with some interesting guitar rhythms and drum patterns.  The final song assaults the speakers and completes the trilogy of songs that although definitely non-traditional, still fit comfortably within the Black Metal fold. Enjoyable.

Next are Morowe who also contribute three tracks. They are a different beast and start proceedings off gently, only to thunder in with a Katatonia-esque riff that gets things moving quite nicely. Vocals are deeper and darker than those of Non Opus Dei and saturate the music with a feeling of terror, further heightened by some claustrophobic guitar-work conjured by the band. The second song starts with slightly cleaner vocals and interesting drum-work. Subtle keyboard highlights help progress the song to great effect, moving into grandiose and epic territory, without ever sounding safe or hopeful. Some well-considered guitars help seal in the sense of unease, and then suddenly are joined by a psychedelic 70’s guitar moment that initially appears quite jarringly, but after a couple of seconds reveals itself to be a stroke of genius and just sounds great. And then on into Post-Metal territory before wrapping up. The final track Czyj to Glos is much shorter than the other two and has a jazzy feel. These three songs are both ambitious and successful. A mark of great things to come.

A strong release showcasing the talents of both bands at creating some nicely non-standard Black Metal. Get it if you can.