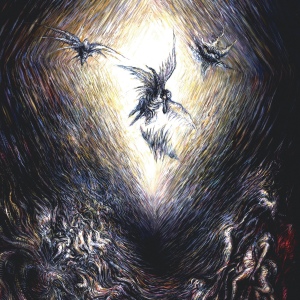 This is the debut EP from Icelandic black metallers Forsmán.

Forsmán play melodic black metal that’s potent and cold. There are four tracks here with a total duration of 25 minutes, and it makes for a quality first foray into the world.

The songs are well-crafted, especially for a debut release. They achieve a balance between blackened brutality and atmospheric melodic depth that’s highly compelling. The harsher aspects are direct and focused, and the band are more than capable of shredding flesh with their icy talons. Alongside this is a melodic sensibility that brings a seasoned atmosphere to the music that sounds as if it has been written and arranged by a more veteran band, rather than a relatively new one. Tying these two aspects together is a rich seam of dissonance that isn’t always present, but weaves a certain frosted magic when it is.

The vocals are prominent and belligerent. Deep cavernous growls threaten to eat you alive and swallow your soul. They are reminiscent of the singer of Behemoth in some ways, but not enough so as to become distracting; they have their own character, and are much more guttural in places too.

This is a very strong release from such a new act. Care, attention, and passion has obviously gone into the creation of these songs, and the results speak loudly for themselves. Don’t miss out on this highly promising new band. Dönsum i Logans Ljóma has impressed.