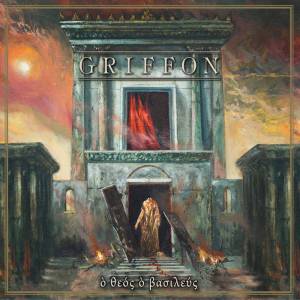 This is the second album from French black metallers Griffon.

Griffon give us a very agreeable and enjoyable take on medieval-influenced black metal. Across 40 minutes, ὸ θεός ὸ βασιλεύς, (or o Theos, o Basileus), proves to be aggressively melodic and energetic, but not without atmosphere or depth.

The band’s folk influences work particularly well in the music, and the songs are well-written and performed overall. Griffon’s songwriting balances modern melodic might with a deeper sense of old-school atmosphere and texture that doesn’t lack for emotive power. The album has a good pace and flows very well. Each song has its own place and personality, while neatly slotting in amidst the whole.

There’s a sense of epic grandeur to these songs that thankfully stops short of ostentation. Rather, this is a display of power and mastery that feels well-earned and right; Griffon are clearly a talented bunch with a clear vision for their music, and they deliver on this vision with the skill of righteous artisans.

The majority of the vocals are harsh screams, but the occasional or growl or other style is sometimes used, (such as spoken word, chanting, or clean singing). The screams sound particularly savage and nasty, which I quite like.

Despite the relatively brief playing time there’s a lot of content to explore on ὸ θεός ὸ βασιλεύς. Griffon have packed a lot of rich content into their material, and ὸ θεός ὸ βασιλεύς is an expressive and rewarding listen.