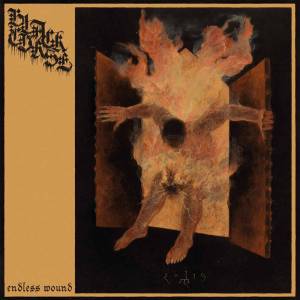 Black Curse are a US blackened death metal band and this is their debut album.

Black Curse contain members of bands such as Blood Incantation, Khemmis, Spectral Voice, and Primitive Man, (as well as many others), and Black Curse provides 38 minutes of poisonous extreme metal.

Rooted in gruesome death metal, but also incorporating aspects of equally morbid black metal and occasional bouts of grim doom, this is nasty stuff. Malevolent atmosphere drips through the clogged pores of this nightmare creation, as trapped daemons howl, wail, and growl. The music’s malice is palpable, and the songs are just as much about how they feel as they are the twisted riffs, brutal drums, or sinister melodies.

Violent and savage, the songs are vicious hymns to foul extremity. Full of filth-ridden riffs and punishing auras, these songs demonstrate a band unfettered by commercial concerns. Instead, they pay homage to the ancient days of extreme metal, worshipping the evil intent and fertile creativity that was so prevalent in those times. This Black Curse use as inspiration for their music, while injecting their own considerable talents into shaping songs that are well-written and very, very good. There’s obviously a large amount of care and attention that has gone into the making of this record, and the band’s passion for the material is clear.

This is an unfriendly, malignant work of primordial darkness, and you need to give this a spin.