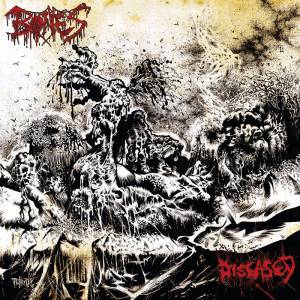 This is the third album from US crusty death metallers Bones.

Sons of Sleaze came out in 2013 and made a mess. Featuring current and ex-members of Usurper, the band clearly had the filthy talents, and now they’re back to make an even bigger mess of things with Diseased.

Raw and ugly, this is music that cares not for aesthetics or prettiness. Bones tear and flail with damaged skill and terrifying belligerence. The band’s mix of death metal and crust is thrown together without care for genre conventions, basically playing whatever they feel like as long as it serves the gods of darkness and beer.

The songs combine preformed structures with a musical architecture that seems more grown than written. Riffs abound, and ragged vocals rip through the music like blunt knives through flesh. Melody sneaks in here and there through these infected wounds, despite the band members’ best efforts to keep it out.

The level of quality you associate with Usurper shines through, and this is a riotously good listen. A heaving mass of half constructed, half cultured songs, Diseased is a monstrous entity of bile and violence.