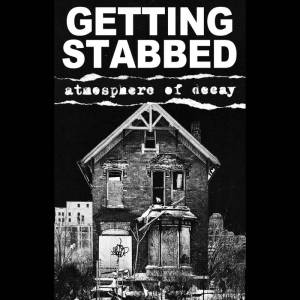 Getting Stabbed are a powerviolence band from the US and this is their debut album.

Featuring a member of No Funeral, Getting Stabbed play a vicious mix of grindcore, hardcore, and powerviolence. Fuelled by a punk rage and an outright hostility to everyone and everything, this is nasty stuff.

I must confess I’m a big fan of this sort of short, violent, rough music. I love discovering a new band who play music as harsh as this, and Getting Stabbed will slot in nicely on my playlists of bands such as Apes, Elder Devil, Friendship, Hell to Pay, Helpless, Leeched, Nails, Sect, Thieves, Wake, WVRM, and the like. Needless to say; if you like any of those bands, you’ll like Getting Stabbed.

Comparisons aside, the important thing here is that Getting Stabbed produce music that counts, rather than music that merely sounds like a certain band or style. In other words, the band are very good at what they do. These songs are short sharp shocks in the best of ways, full of fury and energetic power.

Only one song here breaches the two-minute mark, and every track is a powerhouse of gritty riffs, belligerent drums, and the type of passionately murderous vocals that are the icing on the cake when it comes to albums like this.

The only thing to do with music like this is to jump in and get knocked around by it. Very highly recommended.