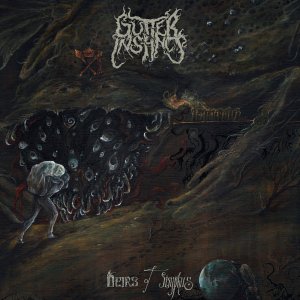 This is the second album from Gutter Instinct, a Swedish death metal band.

Ahh, I love the sound of Swedish death metal crushing its enemies in the morning, (what’s left of it at least – see later). This is especially the case when the style has a malignant blackened sheen to it, as it does with Gutter Instinct’s malevolent output. Having said that, with every release Gutter Instinct change and refine their sound, and this is true of this latest release, as we’ll see.

Of course, this is a band that have already proven themselves to me. 2015’s The Insurrection raised expectations with its Swedish death metal stomp, but it was 2016’s Age of the Fanatics that truly cemented Gutter Instinct as a name to be feared. Taking the Swedish death metal template and infusing it with an esoteric black metal influence, the album was a monster.

Well, it’s now 2018, and we have 46 minutes of new material from the band. On Heirs of Sisyphus, the band have travelled even further down their chosen blackened death metal path, and the new songs they have unleashed on an unsuspecting world are their ugliest and nastiest yet.

As I alluded to above; largely gone is the Swedish aspect of the band’s death metal sound. It seems that the blackened infection that took hold on Age of the Fanatics has well and truly set in, and the rot seems to have almost totally consumed this side of their sound. I say ‘almost’, rather than ‘completely’, as you can still hear elements of the style in some of the riffs and macabre atmospheres.

In its place we have a deeper merging of the black and death styles, resulting in songs that are raw and grim, filled with dark atmosphere and crushing intensity. Gutter Instinct still have plenty of muscle on their frames, and I think that the black metal virulence coursing through their veins is somehow enhancing this rather than weakening it. Heirs to Sisyphus manages to strike a great balance between heavy, weighty death metal and bleak, mood-driven black metal.

Across the songs this combination of direct brutality and morbid atmosphere is keenly felt. From huge, destructive riffs that just seem to strike at the heart of the matter, to blisteringly soul-searing melodies that drip with malice and scorn, these songs embody a certain occult, esoteric intensity. The entire album is hugely enjoyable for anyone into the heavier, darker side of extreme metal.

Heirs of Sisyphus is a wonderfully malefic black/death metal album that continues to see Gutter Instinct progress and develop on their own timeline and according to their own rules. I can’t wait to see what this band continue to evolve into in the future, but for now I’m more than content to lose myself in the bowels of their latest work. Heirs of Sisyphus rules with an iron fist and a black heart.