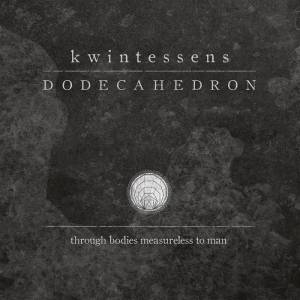 Dodecahedron are a black metal band from the Netherlands and this is their second album.

Much like the recent Ulsect album, (a band that share members with Dodecahedron), Kwintessens is devoted to harrowing nightmarescapes and disturbing atmospheres. Whereas Ulsect accomplish this through a dissonant death metal approach, Dodecahedron take a dark, dissonant black metal path instead.

Cold, horrific, disturbing…these and other similar words can easily be employed to describe this. Dodecahedron sound not of this world. Their music sounds distinctly ‘other’, in that unnerving, discomforting way that very few bands ever achieve.

Pulsating with a dark lifeblood all of its own, this is a terrifying journey into pastures unknown and parts uncharted. Recognisable as black metal through a murky backdrop of dissonance and grim malevolence, the tracks on this release are bleak explorations of what it is to exist outside of the light, away from anything good or wholesome.

The band seem to take joy in creating music that exudes a palpable sense of wrongness and naked menace. Boasting a warped creativity and complex sense of  layered structure, this is an album that’s as impressively crafted as it is terrifying.

This is an album that’s full of texture, so much so that you don’t feel like you actually want to get too close to it in case you are forced to touch its scaled, malignant surface. The tracks have a lot of depth to them and the compositions emphasise this to the exclusion of anything superficial. These are depths that if you fall too far into you’ll never be able to get out again.

Time and energy has obviously been expended to produce the kind of album that makes indelible psychological marks on the listener, clawing at their mind with a haunting darkness.

Kwintessens certainly isn’t for the average black metal listener, but those twisted souls that do brave its atonal delights are in for quite a reward as they become slowly absorbed into the tapestry of the unfolding musical ordeal that is Dodecahedron’s stalking ground.

This is music not just to listen to, but to experience, viscerally. Just be careful it doesn’t completely overwhelm you and drag you down into its bottomless depths.

You have been warned.

One thought on “Dodecahedron – Kwintessens (Review)”