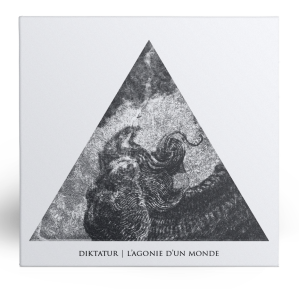 Diktatur are a French black metal band and this is their latest EP.

Do you like black metal that’s raw, sharp and full of aggression? If so, then you should check out Diktatur’s latest release.

This is a band that have a traditional, vicious sound with enough elements of modernity to it that to call them old-school wouldn’t be telling the whole story. In addition to the core scathing blackened assault they assail the listener with they show a lot of good ideas and unexpected treats throughout these 19 minutes.

The riffs cut like razors and the dark, blackened melodies are cast forth with confidence and skill. The guitars are one of the many highlights of this release, sounding suitably frosted and abrasive, but not without colour when needed.

Occasional keyboard/electronic elements are as surprising as they are well-done, cunningly incorporated into the music in key places to give it some extra interest. These added keyboards/samples/etc. give the band an industrial feel when they appear, although these parts are used sparingly, (which also increases their effectiveness).

The singer has a classic blackened rasp and does the job nicely. He sounds good, and uses some very enjoyable vocal patterns across the four tracks.

The production is judged just right, balanced between rawness and power, showing a band that know their chosen style well.

Diktatur certainly know how to write a good song and there’s a lot to enjoy on L’Agonie d’un Monde. This is Diktatur’s first release since their debut album in 2010; I can’t comment on how they’ve progressed since then as I haven’t heard it, but I will say that if the music on this EP is anything to go by, their next album should be a thing of black wonders.