Waldgeflüster’s fourth full-length release Ruinen is an atmospheric post-black metal album that just keeps on delivering the goods. As with a lot of the best albums, the more you listen to it the more you get drawn into it. It’s a lengthy release, but one that earns its playing time by having so much engaging content. Ruinen invites the listener into its dark depths and only fully reveals its many treasures with repeated spins.

Waldgeflüster was founded by me, Winterherz, back in 2006 as solo project. I released one demo and the first full-length alone. For the 2011 full-length “Femundsmarka”, I was joined by my brother. The next record I did alone again, and in 2014, I finally decided that Waldgeflüster will be a complete band in the future, so the guys that helped out live became permanent members then. Together we released our latest record “Ruinen“ in October 2016.

Our influences range through every genre – from acoustic stuff, pop music, electro to the most underground black metal albums that are only released on tape. I listen to so much and so much different music that it becomes harder and harder to name specific influences when it comes to music. Of course, nature is always a big influence for all our songs.

Just to name a tiny excerpt of what I would recommend right now. 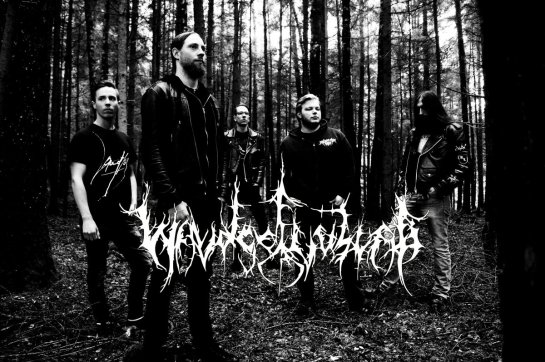 Tell us about your latest release – Ruinen

Ruinen was a hard piece of work for us. We worked on those songs for 2 years and we put a lot of effort in them. Always going back and changing little details until we were satisfied 100%. This record means a lot to us, as I think it shows us as a grown band with a lot of different styles combined into one piece of “Waldgeflüster“. We are in the lucky position to be able to record everything except the drums ourselves, so we were able to really work on those songs and give them the care they needed.

How would you say Waldgeflüster has progressed since its inception to Ruinen?

I think “Waldgeflüster” underwent a huge development since the first beginnings. Starting with the much better sound quality that we achieve nowadays, but in my opinion we also developed as writers. The songs are much more diverse than in the past, also our song structures are much more thought through when compared to 2006. From a project where I wanted to realise some black metal ideas I was not able to realise with my old band, we have grown to a band without boundaries in their style but with keeping a certain “Waldgeflüster” sound.

I worked with Sarah for the last record “Meine Fesseln“ already. As soon as the name for the album was decided, and as soon as we knew that we would probably not be able to get our hands on a photo that would symbolise everything that “Ruinen“ is about, we decided to work with her again. We had a picture in our head of a ruin in the woods with a very dark mood to it. We met with Sarah at my place and talked about our vision. She immediately started to draw some sketches. After a couple of weeks, she sent us the first versions she had worked on, and we knew we made the right decision.

Album art is very important to me. In a time where many people only buy digital albums if they even spend money on their music at all, the perfect album art is the icing on the cake for the people who still buy their records. In addition, I just love it to receive a new order of CDs and go through the artwork and lyrics. The art should always underline and complement the music.

What are some of the lyrical themes on the latest release?

A lot of the lyrics deal with the past and trying to leave old habits and thoughts behind, which will not always work out. They are about trying to grow as a person and about question old ideas. However, it is best if everybody reads the lyrics for themselves and see what they have to say to them. We made some English translations of our lyrics available in the booklet as well as on our homepage www.waldgefluester.com

As I have my own little studio, all of the songs are created there, step by step. Most of the times I collect some riffs for one song, and send them to the other guys, who then come up with riffs that might fit as well. Everything then is arranged in the studio with a drum computer. From a first draft with just some basic riffs, we then work on more on more details, and the song rises from the fog that surrounds it in the beginning.

That always depends on my mood. Every song has its strengths and is shaped for a certain situation. Therefore, I can’t really say which one I like best.

That is hard to say. As always, we will just wait and see where the music takes us. I guess it is safe to say that there will not be another “Herbstklagen” record and that we will probably venture even more in the “Post“- Black Metal genre. However, I can’t even say if the songs will become harder or softer or anything. Who knows, maybe there will be a singer songwriter song on the next one? The only boundary that holds us is that we don’t accept boundaries in our music. We will again write whatever we feel like.

How do you think Waldgeflüster fits into black metal in 2016?

I am not even sure if you can call our music black metal. I guess we found our place in that genre, as 2016 shows a vast variety of black metal acts that venture further and further from the old definition of that genre, and that is where we fit in. With the classic definition of Black Metal, we do not have much in common any more.

What would you say that Waldgeflüster has to offer the listener that might be appealing to them?

Diversity, melancholy, pictures of unspoiled nature that rise from the depths of your soul. At least that is what I hope our music offers.

What are the next steps for the band?

The next steps are definitely to play some shows, hopefully a tour and start writing on new material.

Thanks a lot for the interview and the support.