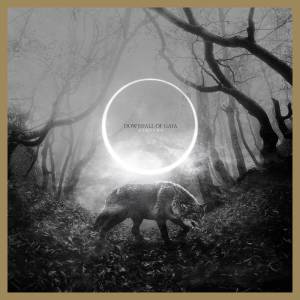 This is the fourth album from German band Downfall of Gaia. They play post-black metal.

This is a release that creates and fosters atmosphere like a second skin. It’s dark and mystical, and keeps its secrets close to its chest despite also being quite warm and welcoming in some respects. Ice-cold black metal full of hatred and blasphemy this is not. That’s not to say that Downfall of Gaia lack aggressive tendencies, it’s more that even their aggression embraces wider feelings and emotive content than just pure rage or fury.

The songs unfold their narrative with an easy talent. There’s a curious blend of both storytelling and journey-taking here, which works well with the band’s mixture of raw blackened metal and polished resplendent beauty. These two aspects merge to give listeners of Atrophy a bleakly inspiring musical odyssey, one which is not soon forgotten.

Atrophy is a post-black metal fan’s wet dream in many ways. The combination of blackened melodies and post-metal texture, with just a splash of the depressive black metal style, makes for some highly engaging music.

I love the rich depth that this album has. Atmospheric black metal is always something special when played right, and Downfall of Gaia have got a lot of the essential ingredients necessary to make a big impact with Atrophy. These songs sound as if they have been lovingly crafted by people who really know their trade.

On top of all of the gems to be found in the music of this wondrous release, I must also mention the vocals. These are blackened screams with a depressive edge. Quite grim, raw and in some ways at odds with the more sophisticated and uplifting parts of the music. This juxtaposition works well though, grounding the songs in the deep underworld and allowing Atrophy to spread out naturally through its corrupted roots as it draws power from the Earth.

If you like bands such as Alcest, Deafheaven, Harakiri for the Sky, etc. I’m confident you’ll also like this. Firmly for fans of modern black metal, atrophy is 41 minutes of top-quality sophisticated post-black metal art.