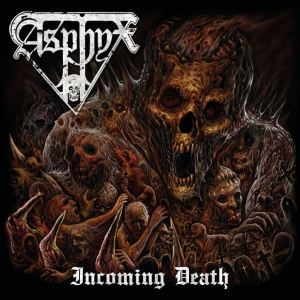 Hailing from The Netherlands, this is the ninth album from legendary death metallers Asphyx.

Asphyx are a well-known band for a reason and new material from them is always welcome.

War-themed and crushingly heavy, this is an album that sweeps you away as soon as you start playing it. Sure, there are lots of bands playing similar styles to this, but none of them are Asphyx.

Asphyx are a very song-oriented band, and on Incoming Death there’s so much catchiness in the songwriting you’ll be worried you’re on the battlefield and caught up in barbed wire as the tanks slowly, relentlessly roll towards you.

The songs provide the listener with a feast of death metal, with influences from the old-school style as well as some doom in the slower parts. No matter what speed they’re playing though, they always sound crushing.

The singer’s voice is on top form; classic death metal vocals that sound like the perfect fusion between deep growls and something a bit more legible, (not so deep growls?). You get the idea.

This is a very more-ish album; no sooner has it finished than you just want to play it all over again. And you should, as it really is that good.

Asphyx once again grace the battlefield with their presence, and their enemies tremble in fear.