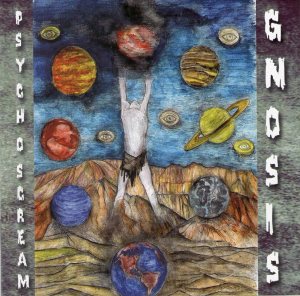 This is the début album from this Italian death/thrash metal band.

Gnosis mixes the death and thrash styles and adds a bit of progressive metal into the mix as well.

The songs merge their thrash and death metal heritages together, taking aspects from both and adding some progressive structures into the gritty mix. There are some classic metal touches here and there too, especially in some of the leads, that add a nice heavy metal component to their style.

The music has a nicely rough edge that sees the band exploring an earthy sound. Everything is well played and there are some good solos and leads dotted around. I feel compelled to mention the drumming too; it’s not exceptionally flashy, overly impressive, or anything like that, but it’s certainly very solid and adds a very satisfying dimension to the band’s music.

The singer’s harsh vocals are halfway between a shout and a growl, putting me in mind of a mix of the singers of Brujeria, Groinchurn and Soulfly.

Psycho Scream have produced an enjoyable début release. With a bit of spit and polish, (but not at the expense of their character), I think they could have a bright future ahead of them.