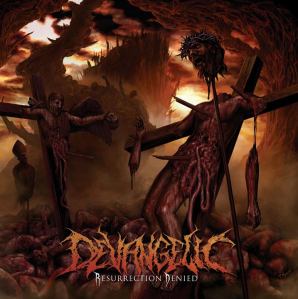 Devangelic are from Italy and this is their début album of Brutal Death Metal.

It bursts out of the speakers in a torrent of gore and blasting, firmly intent on murder and maximum devastation. It’s quite the opening.

This is ultra-brutal and ultra-extreme, with a firm base of USDM and plenty of squeal and chug.

The vocals are deeper than a hole full of corpses and twice as bloody. The singer positively reeks of putrefaction and bloodlust.

The recording is chunky and as solid as a block of granite. It’s heavy enough to flatten at 100 paces and sounds exactly as a band of this nature should. Devangelic sound immense.

This is unsubtle music that nonetheless is clearly played by people who know what they love and love what they know. It’s nothing original but who cares when you can batter your enemies senseless and string up their entrails like party decorations? Devangelic know how to slaughter and they do it very, very well.

Resurrection Denied is a prime slice of bloody Death Metal that should have fans of brutality and sickness foaming at the mouth at the thought of the hideous occurrences they bring.

It’s hard not to like an album as remorselessly, efficiently brutal as this. I’d recommend this. Play it loud and absorb the ugly menace within.